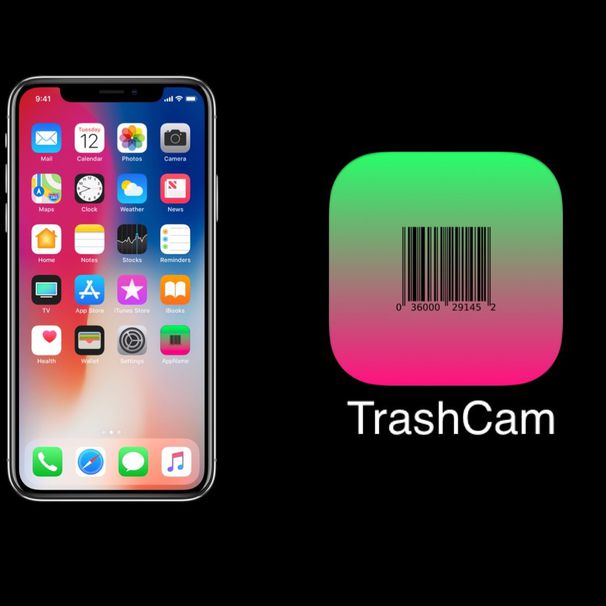 TrashCam | Your Personal Guide To Recycling

TrashCam is a mobile app which helps to reduce the amount of unsorted waste in the environment. The app finds matching garbage bin for your trash. Take a picture, scan the trash and see what kind of materials were used to produce the packaging. http://facebook.com/trashcamapp http://instagram.com/trashcamapp http://twitter.com/TrashCamApp

Citizens and tourists of different Finnish regions are still lacking the knowledge on waste sorting and recycling. The purpose of this experiment is to examine the amount of waste consumed by the citizens of a certain municipality (Uusimaa region) and analyse whether the amount of mixed waste can be reduced gradually with the help of TrashCam. (We have interviewed 200 hundred Finns to find out whether they face any struggles with recycling. 90% of the interviewees responded that they are very often confused and put emptied packages into the mixed-waste bin whenever they're not sure, what type of packaging it is exactly, whereas most of that packaging is either plastic, metal or even bio-waste). Eliminate the amount of unsorted waste in the environment; build consumers' awareness of mixed waste.

Providing the guidance on waste sorting, will, eventually, liquidate all the unsorted waste in the environment of Päijät-Häme region. Later on, the experiment can be scaled up and performed around Finland. Eventually, the number of recycled waste will increase to as much as 100%. 1. Create a treatment group (residents of one household) 2. Make a research of garbage containers in the yard of the household, analyse the amount of waste sorted inappropriately 3. Guide the residents on how to use TrashCam 4. Make sure they use it for 1 month continuously 5. During the experiment, keep tracks on garbage containers in the yard 6. After 1 month, interview the residents to find changes in their recycling habits 7. Make a report about the changes of unsorted waste in the garbage containers and the decrease of the amount of mixed waste MARCH. PREPARING FOR THE EXPERIMENT: 1. Working on the development of TrashCam bot. 2. Consider leading Finnish tech companies to carry out the production of the app. 3. Discussing the project with Päijät-Hämen Jätehuolto, finding the right household for the experiment. APRIL. FIRST STEPS: 1. Developing and testing the app. 2. Making an informing lecture for the participants of the experiment. MAY. PERFORMING: The month of the experiment. JUNE. THE END: Analysing all the gathered data , publishing reports. The goal is to finish the experiment by the beginning of July.

The experiment itself doesn't require any investments, since I will do all the research work by myself and I already have all the required material for that, such as camera, laptop and scales for documenting the process of the experiment. However, over EUR 7,000 would be needed for the development of the app, its testing and uploading to Google Play and App Store. I am going to invest part of it with my own savings. I am also aiming to minimise the amount of waste that could be made in the process of the experiment, so no pamphlets or paper will be used for spreading the required information among the residents. We'll try to make the whole experiment as much digitalised as possible. This will help to save money and, not to mention, the environment. EUR 2 ,500 for the database GS1-Synkka

Statistics on recycling in Päijät-Häme region that I have been gathering for over 2 years; I have done environment-related experiments in Lahti before, so the process of TrashCam experiment will go smoothly. At the moment I'm developing TrashCam bot which can be used as a beta version of an actual mobile application.

At the very beginning TrashCam will have a really simple design and only one function - scanning the product and offering the right garbage bin for it (mixed/ bio/ metal/ hazardous or energy waste). The app will be further developed if we get more funding, hence, evolving into an educational sustainability platform with more functions, such as, environmental news, map of recycling points as well as some reusing tips, supporting different languages.

The prototype of the app is ready.